After attending the exhibition, “The Perfect Medium: Photography and the Occult,” at New York’s Metropolitan Museum of Art in November 2005, I realized I could never satisfy my curiosity for this work in a packed gallery. This was an entire subculture I knew nothing about! Luckily, the book was available.

The authors have extensive experience with occult photographs and consider it an important piece of the field’s history. (They are curators, also, of the exhibition.) While maintaining a strong non-judgmental position about the subject matter (spiritualism) in general, one of the authors, Sophie Schmit, is quoted as saying: “If I hadn’t considered at least the possibility of it existing,” she said, “I don’t think I would have ever been interested in doing the exhibit.” (Ref: strangeattractor.co.uk)

How is the book structured?
The Perfect Medium: Photography and the Occult is a huge coffee table book, containing over 200 color and black and white photographic reproductions. It is laid out in the three sections:

Every time they click their Kodak pics, they steal a little bit of soul

This line from the John Prine song “Picture Show” alludes to the Native American belief that that the white man’s camera stole a piece of the subject’s soul. If we’re tempted to laugh at this now, let us realize that in the late 1800s, many people were just coming to grips with technology. X-Rays were just discovered. They could be used to see through your shoes to see if they were a proper fit for your feet! Was it really that farfetched to think that maybe technology could be used to contact the spirits of the dead? Many Americans at the time were hanging onto the memory of loved ones lost in our Civil War. Could they see them one last time? And the people providing this “service,” were they scoundrels or sincere practitioners? Who was in charge of deciding the limits of physical science? Was it an example of entrepreneurialism at its best…or at its worst?

The book is an interesting window into a period of American and European history (1870s – 1930s) in which many people thought that cameras had more than just the ability to capture the visible world. But indeed, it is entertaining. From a photographer’s perspective, it is simply amazing. From a historian’s perspective-who knew that Mary Todd Lincoln was a believer in spiritualism, held seances in the White House, and attempted to contact her late husband?

Content
This is not just a picture book. The authors of “The Perfect Medium: Photography and the Occult,” present an unbiased history of how advocates of spiritualism in the late 1800s to early 1900s tried to use photography to provide proof of the otherworldly: spirits of the dead, dreams, auras, and thoughts. It also holds fascinating accounts of the efforts of debunkers of the movement. Many luminaries were involved: P.T. Barnum, Sir Arthur Conan Doyle, and the pioneering photographer, Jacques Henri Lartigue. Were these people loons? Were they duped? Feel free to decide for yourself. Any way you look at it, sensationalism sells newspapers. Consider Weegee, the pioneering tabloid photographer, and the entire genre he spawned! Was he good? Bad? Right or wrong? 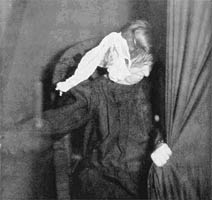 The book appears to be comprehensive, without ever being tedious. All subjects covered were new to me, so they held my interest. Sure, you could easily believe charlatans would make attempts to dupe little old ladies out of a buck by offering to contact their loved ones in the great beyond-and there are many photographs of such parlor tricks. But I’d no idea people used to believe “fluids” called “ectoplasm” could be emitted from various orifices of a medium, with the medium’s thoughts projected onto the fibrous ectoplasm! See photo below, which was made by Albert von Schrenck-Notzing, the distinguished psychologist in 1911:

In summary, the book is most engaging. It informs us of a past many of us would choose to disbelieve. In fact, when I was at the exhibit at the Metropolitan Museum of Art, I saw a woman in her late twenties kneeling next to her four-year-old daughter, saying: “…this was all from before we knew any better.” The authors’ goal is to present the past to us, without passing judgment. They are quite successful in doing this.

Does it leave you wanting more?
The chapter on “Thoughtography” left me with the urge to try this, or witness someone doing it. The idea is simple: Aim a Polaroid camera up against your head, project a thought into the camera, and snap the shutter. Your thought appears on film! Makes me wonder why you even need to snap the shutter…like when the scam “psychic” phones and asks for your credit card number-shouldn’t she already know it?

Do I recommend the book? Absolutely! It is of interest to people of varied purpose-photographers, spiritualists, debunkers of spiritualists, scientists, historians, sociologists, and the downright curious. All those with telekinetic powers…raise my hand!

Photo References
Mary Todd Lincoln with ghost of her dead husband
Taken by William H. Mumler, 1870-75
The medium Eva C. with the materialization of a woman’s face
http://www.cabinetmagazine.org/issues/12/warner.php

Greetings! I'll be exhibiting some of my cemetery photography at the new … END_OF_DOCUMENT_TOKEN_TO_BE_REPLACED