One might imagine the original architects of the garden cemetery had spring in mind when they laid out such calming and pastoral landscapes. The image ‘Dogwood’ (to the left), taken at Historic Laurel Hill Cemetery in Philadelphia, would not be nearly as beautiful or serene without the dogwood tree. When garden cemeteries came into being in the U.S. (mid-1800s), such ornamentation was used for the express purpose of cemeteries less somber and dreadful places.

I’ve been making photographic images in cemeteries since 1999, and it has become my primary artistic interest. I’ve also worked mainly in black and white, though I’ve begun to branch out into color and digital, partly due to my involvement as a member of the Photographic Society of Philadelphia. One of the challenges of being a member is the monthly assignment theme show – for instance, April’s theme is ‘humor’. Each month the results are displayed at Joe’s Coffee Bar at 11th and Walnut Streets in Philadelphia.

It takes but a modicum of intelligence to realize that cemetery photography doesn’t lend itself well to such themes as Humor and Spring – cemeteries are dark, foreboding places, right? I don’t photograph puppies romping through fields of tulips, so the assignments are sizeable challenges for me.

But are cemeteries really that somber? Some are, sure. But garden cemeteries were created with the idea that cemeteries could be a nice place to visit, to walk, and enjoy the scenery and beautiful sculptures. Many garden cemeteries in the U.S. are arboreal wonders, so it’s difficult to avoid photographing gorgeous crimson azaleas or flowering pink dogwoods. Springtime can be rather breathtaking in a garden cemetery. When photographing splendor, however, its much more effective to use just a splash of color rather than allowing the bushware to take over the image. It creates a more balanced composition.

See for instance, the bronze patina sculpture of the seated woman from West Laurel Hill Cemetery in Philadelphia. The spare azaleas frame the statue and complement the greens in the image in a very balanced manner. The flowers add a comforting familiarity to the statue while maintaining the mysteriousness of the statue and its setting. Another useful tool for controlling color is to use a polarizing filter to make your skies bluer. Would the “Dogwood” photograph have the same impact if the sky were cloudy white? Probably not, which is why I plan my photographic outings in part on the weather and time of day. (See 11 Tips for Taking Pictures in a Cemetery for more on this topic.)

For a great book on color photography, check out Camera Craft: Landscapes.

Cemeteries in Black and White

Color photography is typically what comes to mind if you’re thinking about springtime, right? But for those who prefer black and white over color, capturing the essence of spring can present all sorts of creative challenges. Black and white images, as a rule, have to stand on their own since they don’t have color to help define the image for the viewer.

Monochrome images are an abstract impression of what our eyes see. In fact that may be why I prefer black to white to colo r. It allows me the flexibility of letting the viewer define a photograph on his/her own terms (which may also be the reason I dislike titling my work-titles in large part define). 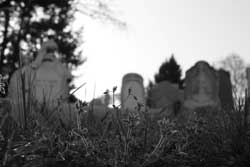 The image “Sprouts” (to the left) is an example of a somewhat abstract image. You can see what is there (grass and tombstones), but the angle suggests a grave vantage point (pun intended). The scene is more than a snapshot – it represents new growth against a backdrop of death. The glow around the buds adds to this effect and was made possible by a front-lit sun at dawn. Monochrome, more so than color, also forces you to pay more attention to such things as white space and the juxtaposition of random and orderly shapes, all of which can make or break a composition.

For a great book on black and white photography, check out Black & White (Camera Craft) 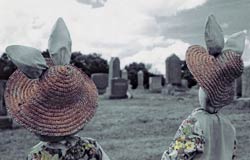 For another effect, you can blend color and monochrome. Check out the cemetery bunnies to the left and you’ll see what I mean. Around Easter, people in Philadelphia will post kitschy three-foot-high bunnies in the ground near the burial place of their loved ones. The photograph was originally made on black and white film. I hand-colored the clothes and hats with photo dyes to reproduce the original colors. I then scanned the photograph to create the digital image you see here. You can also do this in PhotoShop. The whole thing is very labor-intensive, but that’s a story for another day!

These are good resources for hand coloring photographs:

Book: The Art of Handpainting Photographs

Spring is a time of renewal. I hope this article gave you some new ideas to use in your photographic meanderings. While some images work best in black and white, others work best in color. The images of the dogwood-covered mausoleums and the azalea statue, for instance, would have much less impact without the splash of flower color. In my opinion the “Sprouts” image of the freshly grown new grasses against the tombstone backdrop would appear trite if it were done in color. But you might find an entirely new way of expressing this scene in color, one that would cause VanGogh to bow in homage. Its up to you as a photographer to visualize how the image would appear in both color and black and white, then decide which, for you, makes the best composition.

Greetings! I'll be exhibiting some of my cemetery photography at the new … END_OF_DOCUMENT_TOKEN_TO_BE_REPLACED