For the first time, I’ve mixed the content of one of my shows–angels and demons. I was offered the opportunity to hang work at Mugshots, a coffee house in the Fairmount section of Philadelphia. As Mugshots is right across the street from Eastern State Penitentiary, I decided to show both bodies of work (especially since Bastille Day would be celebrated there on July 15!). But what would be the connection, a common theme associating angels and prison? 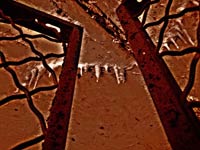 “Cemetery and Penitentiary Photography” was the working title of this show. The actual title of the show became “Confinement in Solitude.” In this article I’m going to explain how I came up with that title. Here’s my Artist’s Statement for the show:

These words, used to describe Eastern State Penitentiary’s philosophy toward criminals, eerily parallel that of a cemetery. ESP’s original idea that freedom (from criminal behavior) could be achieved through confinement was less than successful. Isn’t everything about the tension between freedom and confinement? Cemetery angels vividly portray this–creatures of flight, frozen in stone.

I’d long been a fan of urban decay-beauty in detritus. Perhaps one reason I enjoy photographing old cemeteries and Eastern State Penitentiary is this oppressive attraction they both possess. But how to connect the two? Coming up with an Artist’s Statement is considerably more difficult than coming up with a title for an individual piece of artwork. I would rather eat bees than do either. Such contemplative writing requires more soul-searching, I believe, than the actual creation of the art itself. So much of the creative process is feeling, rather than overt planning. Like the artist N.C. Wyeth said, in order to create a successful piece of artwork, you must have an emotional connection with the subject. Agreed, but how do you put that into words?

I don’t particularly care for writing about my work because I feel I expose more of myself with words and I risk assigning specific meaning to my work. I’d rather leave it to individuals to find their own meaning in the art. For instance, if I took a picture of a pork chop, hung it in a gallery, and labeled it “Pork Chop,” most people wouldn’t look twice it at. They’d think, “Yep, that’s a pork chop alright.” On the other hand, if the same photograph were untitled, people might think that metaphorically, I’m commenting on the carnivorous nature of man, or space and the passage of time. Subconsciously, I might be. You get the idea.

So even though labels are for jelly jars, I am expected to come up with titles and Artist Statements. So how to make them relevant without giving away the farm? In analyzing the connection between angels and prisons, I gave up early on obvious titles, e.g. “Angels and Devils” (while there were angels in my photographs, the devils were only implied); “God’s Servants and Satan’s Minions” (a bit harsh on the shoplifters and other petty criminals who occupied Eastern State); or “Angels and Penitents.” That last one had promise.

Crime and Punishment in the Victorian Age

When the prison opened in 1829, its founders believed that solitude would “make the criminal regretful and penitent” (hence the new word Penitentiary added to our language). Legislation specifying “separate or solitary confinement at labor” was passed. This correctional theory, as practiced in Philadelphia, became known as the Pennsylvania System, and it became world-famous.

In 1913, The Pennsylvania System of confinement with solitude was abandoned at Eastern State. The system had actually broken down decades earlier, prompted by Charles Dickens’ criticism of the philosophy. He visited the United States in 1842 to see Niagara Falls and Eastern State Penitentiary–two wonders of the Victorian world. He later wrote, “The System is rigid, strict and hopeless solitary confinement, and I believe it, in its effects, to be cruel and wrong…”

So Eastern State’s original concept of freedom (from criminal behavior) through confinement, failed. Stone walls, like stone wings, fail to ascend the arc to freedom.

Death and Mourning in the Victorian Age

Founded in the Victorian 1830s, both Eastern State Penitentiary and the great garden cemeteries like Laurel Hill (Philadelphia) speak volumes about American societal beliefs and norms at the time. Both are examples of our attempt to come to terms with the undesirable realities of death and crime–we confine them both in solitude. We reward them with burial and imprisonment, respectively –“interment” vs. “internment.” Both Eastern State and Laurel Hill were architectural wonders created in a rural setting–Philadelphia had not yet grown to reach them. Penitence and mourning practices both reached stellar proportions in that era (when a family member died, the official mourning period usually lasted a year, during which time ritualistic wearing of black clothing was observed), as did the epic flourish of angels and other ornate cemetery statuary.

Funny how the words interment and internment get confused. Interment is burial; internment is simply imprisonment. If you had asked the inmates at Eastern State to compare their confinement in solitude with that of those interred at Laurel Hill, they may not have thought the difference appreciable. They may have felt like the stone angels–or as T.E. Lawrence would say, “the living knew themselves just sentient puppets on God’s stage.” To me, cemetery angels vividly portray the tension between freedom and confinement that inmates at Eastern State must have felt. This tension between freedom and confinement–isn’t that what life is all about?

Greetings! I'll be exhibiting some of my cemetery photography at the new … END_OF_DOCUMENT_TOKEN_TO_BE_REPLACED